Gets shot from a cannon.

Elijah shoots a laser out of a flashlight. If you hold it for long, the flashlight blows up and it KOs the opponent.

Side B -Crotch Machine Gun

Elijah pulls out his pants and yells "Active Crotch Machine Gun!" and shoots bullets at the opponent. The longer you hold it, the stronger it gets.

Up B -Giant Bubble

Elijah rides a giant bubble to go to a higher place.

Same as Stewie Griffin's Down B, but instead, Elijah says "Boom, boom. Boom, boom."

Elijah pulls out a wand and it turns Johnny Test into a whiny, rotten, spoiled little brat that wants anything in the world. Then, Elijah throws him off the stage and the final smash ends.

Up: "Who's the metallic king?"

Sd: (with partner) "You helper made me happy!"/(without partner) *laughs*

Victory 4 (only against Johnny Test): "Cartoon Network and Teletoon, cancel his show!"

Lose/Clap: Gets his head stuck in the ground. 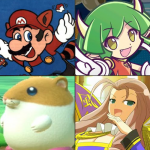